Well I started this post on Tuesday and time got away from me, as well as, catching that little thing called Strep! So this mama has been stuck in bed since yesterday and trying to feel better! Thank goodness I have an amazing husband, parents, and friends to help out! I honestly don’t think I would have survived without them (yes yes I’m being over dramatic, but try nursing a teething 6 month old and not being able to take in fluids so you become extra dehydrated) anyways.. this post isn’t about me.. here’s what I typed Tuesday….

Today’s the day we had Fisher’s hearing test and hemotology appointment, as well as, Wells’ first dentist apt. 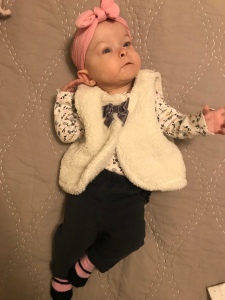 First up, hearing test.. wasn’t really a hearing test just a hearing screening. She failed this. They ran tymps on her and they were flat (which I told the audiologist before hand they’ve been flat all week bc I’ve tested 3 times at our office) anyways.. since she failed the screening and has congestion still, she wanted us to come back in 6 weeks to repeat. If she fails again and has flat tymps again, we will have to see ENT for possible tubes. 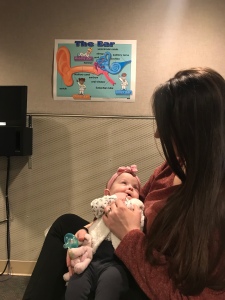 Second appointment was to see the hematologists/oncologist… of course when you see this sign you get a little more nervous.. 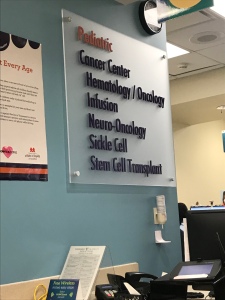 So we met with Dr. Benedetti about the nodule they found on Fisher’s adrenal gland. Here’s what he said: there are three things the nodule could be…

3. Neuroblastoma (a cancer that is treatable and curable)

They did a urine test to see if her adrenal glands are secreting high levels and if so then most likely it’s #3.. if her levels come back low, it’s most likely #1 or #2. We will have another ultrasound in 6 weeks and then push off to every 3 months. Dr. Benedetti doesn’t believe it’s Neuroblastoma, he said it would be very rare if it was.. I had to remind him who we were talking about. We will find out either tomorrow (Friday or Monday at the latest)

On the plus side Fisher rolled over for us on the doctors table!

Then we had Wells’ first dentist appointment! My mom has taken him and since it was their first visit they wouldn’t see him without bobby or me. So off we went as a family to his first appointment and man did he do good! 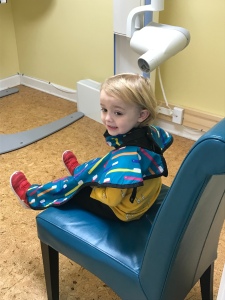 So so proud of this sweet boy! He seriously was amazing 🙂

Will update everyone as soon as we find out Fisher’s test results!! Until then, please pray the rest of the family doesn’t get strep especially my babies!!

2 thoughts on “The waiting game..”